Pharmacies and Parapharmacies in France 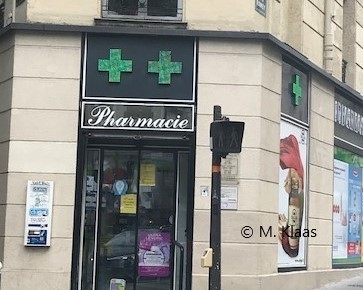 Drastic changes in the pharmacy and parapharmcy sector in France

March 2020, by Maria Klaas Drastic changes for pharmacies and parapharmacies in France expected in the near future.

Changes for pharmacies in France

Unlike in Germany, many Medical Devices are sold in by pharmacies or parapharmacies in France.

It is particularly important for medical technology companies from abroad to closely observe these two market segments in the coming years, as drastic changes, also initiated by the authorities, are planned.

Around 21,000 pharmacies are spread throughout France.

They have the drug monopoly for prescription products. In the segments hygiene, beauty and dermocosmetics, pharmacies also had a market share of 78% compared to parapharmacies (Los Echos, 2017).

Advantages are the unsurpassed number of nationwide sales points, their customer loyalty via prescription drugs and the opening up of new sales fields such as the distribution of private label brands in the fields of hygiene and dermocosmetics.

Although online trading has been permitted in France since 2012, only 2.3% of pharmacists have an online licence so far. Only 1% of OTC medicines are sold via online trading. In Germany the figure is 14%. However, more and more pharmacists are joining the emerging online platform companies through which OTC drugs are sold. However, the products are not supplied by these online companies, but via the individual partner pharmacies. Or the customer picks up his products at these pharmacies himself.

These online platforms also include the Swiss company “Zur Rose”, the parent company of DocMorris, which bought the French company Doctipharma with 100 partner pharmacies at the beginning of 2019. Other online platforms include Pharma-Vie, which works with around 600 local pharmacies, and the Belgian group Pharmasimple, which bought the French “1001 Pharmacies.com” in the past.

The competition authority ADLC has undertaken to reform the pharmacy segment even more.

For example, online trading is to be boosted by no longer having to have the pharmaceutical warehouse closely linked to the pharmacy as has been the case to date. This could lead to the formation of completely different pharmacist groups in the future.

The previously valid pharmacy obligation, e.g. for OTC drugs which can be prescribed by the doctor as an option – e.g. for cold remedies or remedies for light wounds – is also to be softened and in future may be dispensed in parapharmacies. This is also to apply to essential oils that are available in pharmacies, self-tests and Medical Devices such as blood pressure monitors.

New sales areas for pharmacists are to be opened up for this purpose.

For example, since the beginning of 2019 pharmacists have been allowed to vaccinate their customers, e.g. “repeatedly” against influenza.

In addition, it is intended to lift the ban on a pharmacist owning only “one” pharmacy and minority stakes in a small number of pharmacies, and even to allow outside investors.

Parapharmacies as the challengers for traditional pharmacists

In France there are no traditional drugstores like dm or Rossmann in Germany.

Cosmetics and dermocosmetics, food supplements and also medical accessories are offered via parapharmacies.

Parapharmacies appear on the market either as independent parapharmacies, e.g. the No. 1 parashop with 63 stores throughout France, or in department store/ supermarket chains such as Monoprix, Carrefour, Auchan, Hypermarché Géant or Leclerc, all of which have a very large network of branches.

The segment of parapharmacies will become immensely important in the future due to the changes in the pharmacy segment planned by the ADLC (Autorité de la Concurrence ). In particular, Medical Devices will increasingly be allowed to be sold via this channel.

In summary, it now remains to be seen when the changes will take effect. In any case, medical technology companies focusing on France should start looking for suitable distribution partners now. As always, whoever has positioned himself first “makes” the market. Click here for our service